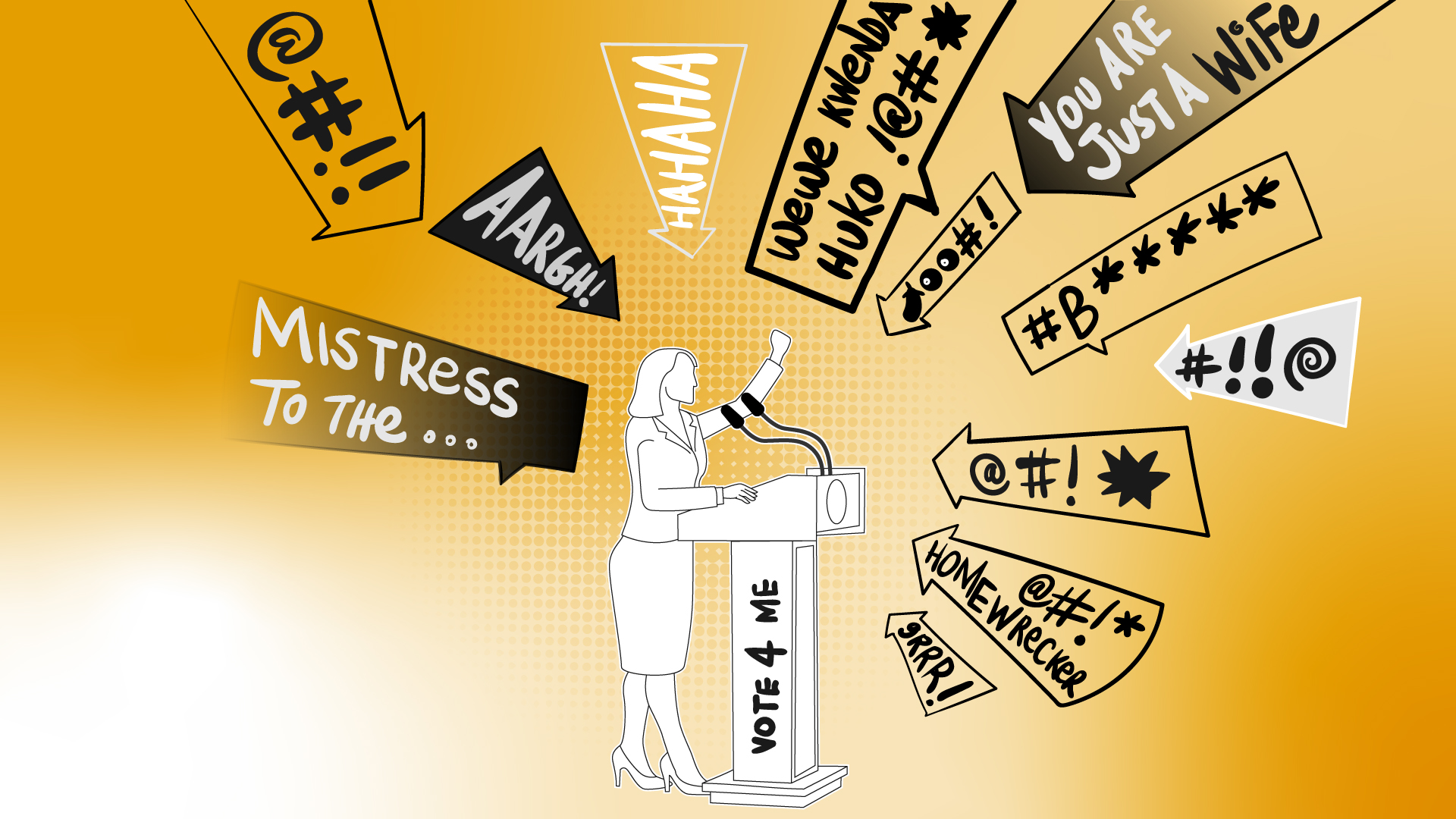 Lucina Di Meco, the co-founder of #ShePersisted and gender expert, describes gendered disinformation as ‘the spread of deceptive or inaccurate information and images against women political leaders, journalists and female public figures” in a way that draws on misogyny and societal stereotypes.

There are various attacks under the gender disinformation umbrella. These include

Nendo was therefore contracted by #ShePersisted to investigate these attacks in the Kenyan context. In order to do this, Nendo utilised three methodologies:

We conducted social media listening by utilising Brandwatch, the world's leading social listening tool. After identifying women in various leadership spaces in politics, media, public office and business, we tracked sentiments and conversations around them in order to uncover any forms of attack in the social media space.

We uncovered that most female political figures face negative comments and perceptions from social media users. The graph above shows the negative sentiments towards 15 female political figures in Kenya. The figure shows Martha Karua was largely targeted and attacked followed by Alice Wahome among other key politicians. However, the data may be skewed towards Martha Karua as she has the largest following and big media coverage attributed to her being announced as Raila Odinga's running mate in the 2022 general elections.

Female politicians face tribal attacks which consist of 44% of the attacks observed. This is followed by insult attacks, high qualification and appearance-based attacks respectively as shown in the chart below. The mentioned attacks were mainly from media publishers who played an influential role in sharing these opinions publicly. The women also face sexualised attacks, through images and memes, that is meant to humiliate and demean them.

Nendo conducted two media monitoring reports covering the periods from 22nd February - 22nd March and 6th May - 6th Jun 2022. The radio media monitoring reports focused on the radio and explored how anti-sexual reproductive health and anti-gender content surfaced through scans of hours of radio programming across several popular radio stations. Topics that constitute gender disinformation are not discussed on air while reproductive health, as well as FGM, topics are widely covered by various local radio stations.

Nendo conducted four WhatsApp focus group discussions that were aimed to help the #ShePersisted team with the following:

Through the WhatsApp Focus Groups, we uncovered the following:

Our Recommendations for Future interventions

HelioSight
Daily, 7AM
This 100-to-300 word email and PDF report sum up the previous 24-hours for the brand with action points, areas of concern and a snapshot of insights. It features screenshots of trending updates, threats to brand safety and high-level insights on behaviour. They set the table for any deep dives that come later in the day, week or month to revisit. A weekly digest of the same is made every Monday.
Brand Tracker
Monthly, by the 5th
The Brand Tracking Report looks into the state of the brand, according to various metrics and areas of interest for key leadership. An important breakthrough of this was developed in April of 2018 when Nendo began to track brand perceptions around mobile data bundles. Specifically contrasting negative sentiment into two specific metrics to be compared month-on-month. The first was stealing concerns. This referred to the number of customers whose complaints centred around the idea that Safaricom was “stealing” from them because their mobile data bundles were being consumed quickly. The second metric tracked price sensitivity. This metric tracked customers who felt that Safaricom was pricier (or less value for money) compared to competitors. As different campaigns, offers, promotions and products were launched, these metrics were compared (as well as more pre-agreed metrics tailored to Safaricom’s priorities).
Communications Tracker
Monthly, by the 5th
Monitoring communications and their efficacy is vital to delivering insights for marketing effectiveness. Nendo monitors Safaricom’s outbound communications and compares this with competitors, including the range of comments, compliments and complaints. Customers tend to have creative suggestions and important responses to communications from the brand. Nendo tracks this with a view to assessing the communications and its engagement, delivery and consumer response.
Campaign Tracker
Ad-hoc
When campaigns are launched by the Brand, Marketing and Communications Team within Safaricom, Nendo is on standby for special reports. During the first week of the launch of the product, campaign, offer or promotion, Nendo delivers daily reports with specific feedback for stakeholders. Dashboards and Alerts are set up to provide real-time data and insights for stakeholders. Nendo also makes content calendar recommendations based on consumer insights during the first week, leaving room for implementation and adjustments.
Intent To Churn/Join
Monthly/Ad-hoc
A hallmark of Nendo’s reporting has been creating and monitoring consumer intent. The “Intent to Churn” and “Intent to Join” charts provide key leaders with a high-level customer view that is future-facing. Using Crimson Hexagon’s artificial intelligence platform BrightView, Nendo has developed a scoring mechanism to classify the customer responses to Safaricom products and services. This allows for existing marketing and communications campaigns to be evaluated by whether they shifted sentiment among the customer base and drove consumer intent to join or addressed intent to churn or leave the service. The implications on this touch on more than just the marketers, as it assists technical teams to keep score and service delivery high to maintain customer experience.
Communications Tracker
Communications Tracker
Communications Tracker

Corporate Communications
Influencer Identification, Engagement and Reporting on Performance and Delivery
With influencers commanding high prices, what is the best way to evaluate success and, keep discovering and sourcing new influencer talent? Nendo, through a series of special reports for senior leaders in this business unit, gave insights and recommendations that saved the business funds, aligned incentives of the influencers and agencies and uncovered micro-influencers to experiment and engage with for upcoming campaigns.
Corporate Communications
Visual Share of Voice
Safaricom’s logo is one of the region’s most recognizable. As part of the journey towards giving insights into this, Nendo performed various analyses of imagery online to spot and highlight the Safaricom logo. This was primarily to search for threats as far as brand safety is concerned. This also allowed a visual share of voice to be calculated; however, there are a limited number of brands from Africa with which to be compared.
e-Commerce
Competitor Tracking and Customer Insights
When serving the team building out Masoko.com, Nendo analysed the online inventory of Jumia, Kilimall and other rivals. This was done, including analysing their social media complaints and comments for further first-person insight. Their websites were analysed for performance, Facebook ads interrogated to understand their promotional priorities and their Facebook, Twitter and Instagram pages reviewed to determine their content calendars to better understand their marketing objectives. This was all performed to give the Masoko team an edge when understanding their competition.
Research & Insights
Customer Segmentation on Digital Platforms
Safaricom has long prioritised the work of understanding its customers beyond the standard metric for all telecoms companies of ARPU (average revenue per user). Nendo was charged in 2018 to develop a lens to view its digital customers. Using outside insights, Nendo analysed over 130,000 online updates and +20 variables to create a set of digital segments of users.

From internet users who were sparsely using the internet, yet had high-end smartphones to first-time entry-level smartphone users. Nendo also identified a set of key descriptors that the branding and marketing team could incorporate to reach and engage with existing customers, based on how they described themselves.
Research & Insights
Tracking Digital Customer Satisfaction
Customer experience metrics matter in the competitive landscape. Nendo created a model using the six basic human emotions, according to Dr Paul Ekman, Surprise, Fear, Disgust, Anger, Joy and Sadness. From these, Nendo crafted a monthly satisfaction score that helps the business keep tabs on its performance in the marketplace.
Brand & Marketing, Customer Experience
Branded & Unbranded Mentions
Social media teams and brands require a higher level of insight to know the full ‘galaxy’ of terms that customers use when engaging them. Nendo successfully mapped out Safaricom’s products and services, ranked them by their share of voice from customers, and then analysed customer behaviour to find alternate phrases, slang and keywords used to refer to the products.

For example, Safaricom’s financial services platforms include M-PESA, M-Shwari and FULIZA. In addition, Safaricom’s financial service department is an enabler of technology and has key client relationships such as Kenya Power, Nairobi Water, SportPesa, Betika, among other partners. Within this are mentions of Safaricom, its related products and services and other relevant updates where @SafaricomPLC and/or @Safaricom_Care, its two official handles are not tagged.

For these, Nendo created Boolean queries to capture the more extensive keyword network and allow for a full review of the brand to be conducted. This allows the customer experience teams to determine which issues they want to proactively respond to and engage with while maintaining their response rates/times for direct queries.
Software and Information Technology
Digital Customer Journey Analysis
Safaricom has launched a range of digital products, services and experiences. As part of this, there is a need for constant feedback and review to improve.For its Facebook and Telegram chatbot, Zuri, Nendo performed a detailed technical analysis of the natural language processing capabilities and pre-scripted responses from the organisation. This gave technical feedback on improvements and areas of impact, based on the review and experience with customer comments from the year before.

For Safaricom Platinum, the proposition aimed at high-value customers, Nendo was able to identify a user-experience issue that was limiting the number of signups after launch. After delivering a comprehensive user experience review, Nendo recommended the placement of a signup button based on its proximity to the thumb of the everyday mobile internet user in Kenya. Using the top 10 list of smartphones, the screen size (in inches) and assessing placement, Nendo was able to make recommendations for technical adjustments that led to an increase in signups to the service.

We uncovered that most female political figures face negative comments and perceptions from social media users. The graph above shows the negative sentiments towards 15 female political figures in Kenya. The figure shows Martha Karua was largely targeted and attacked followed by Alice Wahome among other key politicians. However, the data may be skewed towards Martha Karua as she has the largest following and big media coverage attributed to her being announced as Raila Odinga's running mate in the 2022 general elections.

Female politicians face tribal attacks which consist of 44% of the attacks observed. This is followed by insult attacks, high qualification and appearance-based attacks respectively as shown in the chart below. The mentioned attacks were mainly from media publishers who played an influential role in sharing these opinions publicly. The women also face sexualised attacks, through images and memes, that is meant to humiliate and demean them.

How to scale your app into new markets. Download our free playbook!

Using our learnings, we created a playbook for Hover to act as a step-by-step guide they could use when launching Stax into new markets. Nendo is sharing a free generalized version that you can use to help increase installs and in-app engagements for your own mobile applications!

Thank you for showing interest in the Playbook

Got a project? Let's talk

Discover what we do, who we've worked with, the work we've done, the insights you need, and questions we answer. Or simply say hello.

Thank you! Your submission has been received!
Oops! Something went wrong while submitting the form.